This month we have a guest blog post from Centre for Digital Media student, Sam Stumborg, telling us about some of the exciting projects that were recently made at the school.

Three student projects are using games or gamified technology to teach healthy behavioral changes in response to very different problems industry clients posed to them. The student teams (The Goal Diggers, Brain Bros & Viva la Vida) were given varying problems and briefed by different clients, yet they all decided to build digital, gamified solutions.

Contractor City: An Idle Game for Working Contractors
The Goal Diggers (Peter Zhengyang Pan, Sam Stumborg, Rubing Bai, Dafne Delgado, and Mikayla Preete) decided to create Contractor City, a mobile idle game after extensive consultation with their clients FortisBC and BC One Call. Ian Turnbull, a construction and pipeline safety expert helped the team discover that younger contractors didn’t know about the BC One Call animated ads (“Call before you dig!” with a talking horse). As a result, these contractors were at an increased risk of striking a pipe. A game was one of the solutions the team proposed to address this knowledge gap. This idea eventually became Contractor City.

Rather than a traditional “win/lose” video game, Contractor City is an idle game that plays itself while you’re away. Like a stock portfolio that constantly accrues interest, idle games push the envelope of what it means to be a video game because little player interaction is needed. Pocket-sized, easy to play, Contractor City aims to teach the player how important it is to know what’s below by rewarding safe ground disturbance practices and punishing dangerous deeds. As a way of rewarding contractors, there is an option that allows players to turn their real-life BC One Call reference numbers (a number you receive when you call their service) into in-game currency rewarding real-life safety with in-game success. All in all, the game aims to make lasting behavioural change by encouraging repeat use, safe practices, and BC One Call membership. 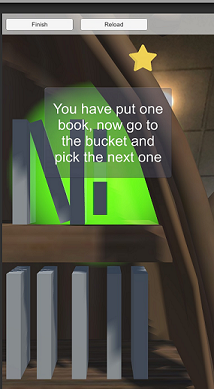 Viva La Vida: Making Exercise Fun Again
With a focus on human health, MDM team Viva la Vida’s project is the kind of serious game that could get it invited to the 2020 Serious Games and Applications for Health conference being held at the CDM next summer. Laureen Wales, CEO of Your Viva, approached the Centre of Digital Media looking to build an installation on the University of Alberta campus that would encourage students to get fit on their way to class. Like the Goal Diggers, they were being tasked with instilling behavioural change in a younger audience. After a lot of testing and research, the team convinced Laureen an installation was the wrong solution. Instead, they landed on a game where every step is rewarded, individual actions benefit a team, and specific physical activities are assigned as quests.

Team Viva la Vida’s product is an augmented reality app with game elements that reward and engage the player. When Pokemon GO! launched no one expected there would be healthy and beneficial outcomes. The members of Viva la Vida (Emily Cao, Ghazal Jenab, Hang Zheng, Isabelle Rash, Shervin Mortazavi, Ziyi Xu) worked backward, from the intended benefit toward an augmented reality game with teams, territories to capture, and a map built from Google Maps. Instead of ignoring the health benefits, they doubled down, tying the player’s progress in the game to in-game exercises, activities, and social engagement. Exercises include activities like “shelving books” where the player has to move their phone up and down as if they were taking books off a high shelf and putting them on a lower one. This is actually a repeated stretching motion under the guise of “shelving books” but it and other activities help the user move and keep active without obviously being exercise. As team Viva la Vida found out, the biggest barrier between an inactive student and exercise is mental and it’s the biggest stumbling block to leapfrog. 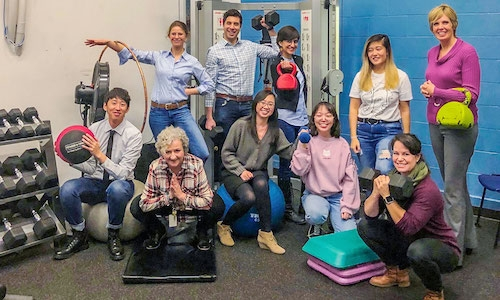 Cerebro: Mind Games by Brian Bros
While the first two groups had to convince the client that a video game or gamified digital content was a solution to their problem, Dr. Claudia Krebs approached the CDM specifically looking to build a game. In this case, a game for medical students that would help them better memorize brain structures for their neuroanatomy courses. After significant research and development, team Brain Bros (Julia Lastovikova, Kimberly Ann Burke, Niccolo Pucci, Oliver Riisager, Sean Jeon, Weiyi Zhang) built Cerebro, a 3D game that you play on a mobile phone. In this game, the player aims a robot (named NeuRob) to fly through the parts of the brain and spinal cord. Memorizing the structures helps them rack up points in the game and (one hopes) points on their exams. 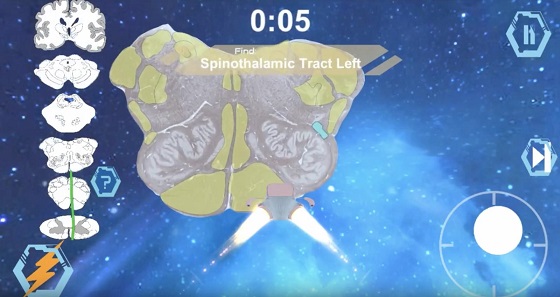 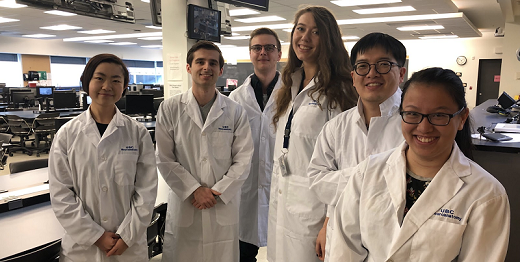 The New Genre of Healthy Games
Both the Brain Bros and Viva la Vida have joined an exciting field that blends health science with video games. Indeed, health and video game professionals are working closer than ever before with neuroscientists like Adam Gazzaley building the case for the medicinal benefits of video games, even nabbing the front page of the prestigious journal Nature in 2013. Rather than simply training doctoral students, encouraging physical activity or behavioural change, Gazzaley’s Neuroscape Lab, Akili Interactive Labs, and others are actively pursuing FDA approval for medicinal video games.

Serious Games Here in Vancouver
As the world waits for FDA approved medicinal video games the Centre of Digital Media is joining those charging ahead. Vancouver based Biba Venture, Ayogo (on the same campus as CDM), and Mod7 Communications (now a part of Open Road Communications) are all pioneering in the same space which makes Vancouver fertile ground for serious games. The 8th annual international conference for the Institute of Electrical and Electronics Engineers (IEEE) on Serious Games and Applications for Health (SeGAH) are both coming to Vancouver in 2020, hosted at the Centre of Digital Media. The CDM is a natural fit for SeGAH with a master’s program already building games for real-life applications. With three gamified solutions to professional client problems this semester alone, the CDM can expect to have approximately nine more student projects seriously applying game elements before SeGAH opens August 2020.