This year is DigiBC’s 25th anniversary and the sector came together to celebrate on Saturday, October 1. It was our first in-person event since 2019, and we couldn’t have asked for a better way to celebrate our anniversary with members from across BC’s incredible creative technology industry! The night kicked off with opening remarks from Loc Dao (Executive Director, DigiBC), and then Loc and Charles Creighton (President, Departure Lounge) welcomed T'uy't'tanat Cease Wyss and her daughter Senaqwila to perform the first-ever volumetrically captured cultural welcome. After which Jon Lutz (Board Chair, DigiBC), Brenda Bailey (Parliamentary Secretary for Technology and Innovation), Valerie Creighton (CEO & President, CMF) and Loretta Todd (Creative Director, IM4 Media Lab) spoke. There was a flurry of networking and socializing throughout the rest of the evening, and it showed just how valuable these events can be.

The celebration occurred during the sold out Signals, which was a first ever collaboration between the Vancouver International Film Festival (VIFF) and DigiBC. This unique interactive exhibition, co-curated by Debi Wong (re:Naissance Opera), Loretta Todd (IM4 Media Lab) and Loc Dao (DigiBC), displayed the creative power, playfulness, and storytelling potential of new technologies with a multi-day showcase of Canadian and Indigenous works. The exhibits, ranging from real time 3D performances showcasing holograms and LED volumes to VR multiplayer gaming to a dome 360 film, were spread over three themes which included:

Signals was produced by veteran Producer Janine Steele (Creative BC, NFB), in collaboration with the great team at VIFF led by Kyle Fostner (Executive Director). Our 25th event, education and VIP tours were produced by Kristina Lao, and thanks to DigiBC staffers Sarah Liao and Colleen Arndt for the great work on both events.

We’d also like to thank the Departure Lounge and Looks Great Entertainment event production teams, as well as all the exhibitors, creative advisors, staff members, contractors and sub-contractors for their invaluable contributions, time, and efforts. 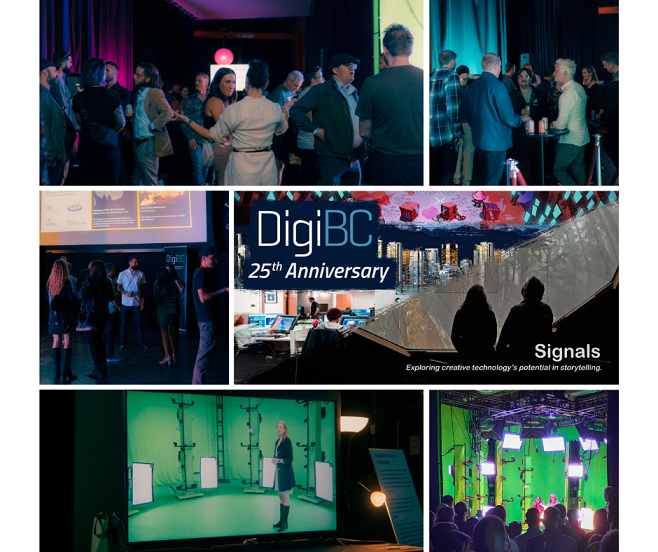